Since many of us are still living like good little hermits these days, I thought Hermits cookies would be a good topic for this weeks blog – which might also be my last blog for awhile depending on how well it goes with the new WordPress editor next week.  I didn’t like the new Block editor when I tried it last spring (see Blockheads post) and am not in the mood for a new learning curve.   Wordpress might think this is a good time to switch (or begin the migration as the Happiness Engineer called it), because we are all stuck at home, but call it computer fatigue or lockdown fatigue or whatever, I need less not more screen time right now.

Back to the Hermits – Webster’s dictionary defines a hermit as:  “a) one that retires from society and lives in solitude especially for religious reasons : recluse,   b) a spiced cookie.

Hermits are an old-fashioned recipe dating back from to the mid-1800’s in North America, or even earlier, possibly originating in the hermitages of the middle ages.   They refer to any kind of spiced cookie containing dried fruit such a raisins, currants or nuts.  They may have white or brown sugar and come in either bar, square or drop cookie format.  They’re made from  ingredients you might already have in your pandemic pantry, which along with the addition of cinnamon, cloves and spices produces a soft cookie which keeps well.   Nutritionally, their sweetness comes from raisins and dates, and nuts are a good source of omega-3’s and protein.

There are various theories about the origin of the name.   Some sources say they were called hermits because they looked like a hermit’s brown sack cloth, (the ones containing molasses).   Others say the spices become more distinct with age, making the cookies taste better if they have been hidden away like hermits for several days.   Very likely the oldest recipe goes back to the 12th or 13th century religious hermitages, where the basic ingredients would have been in common use at bakers’ tables.   The terms for those abodes— “hermite” from the Old French or “heremita,” from the medieval Latin — may have been assigned to this treat by their inhabitants.   Another possibility is that the Moravians, a German Protestant religious group known for their thin spice cookies in North Carolina and Pennsylvania, were sometimes called “herrnhutter” in German or Dutch, and that might have sounded like “hermits” to an English-speaking cook.   At any rate, they are spiced cookies based on raisins and nuts…..so let’s get to it!

My recipe today will be from my mother’s bible of country cooking, the Purity CookBook, first published by the Purity Flour Company in 1911.  Her edition dates from 1945 and is well stained, and is in fact held together with that old Canadian standard – duct tape. 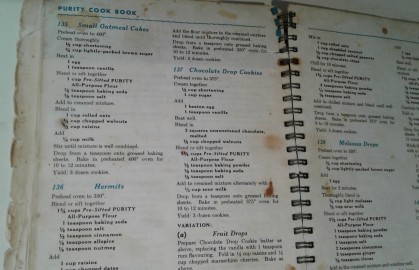 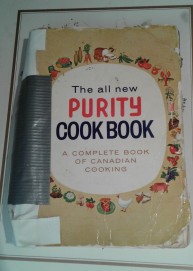 As well as main courses and desserts, it contains a large section on canning  vegetables and making various jams and jellies.   Nothing of course is low in fat or calories as those were not deemed important back then.   When it was re-issued in 2009, I bought a copy for myself, which you can see is still in quite pristine condition. 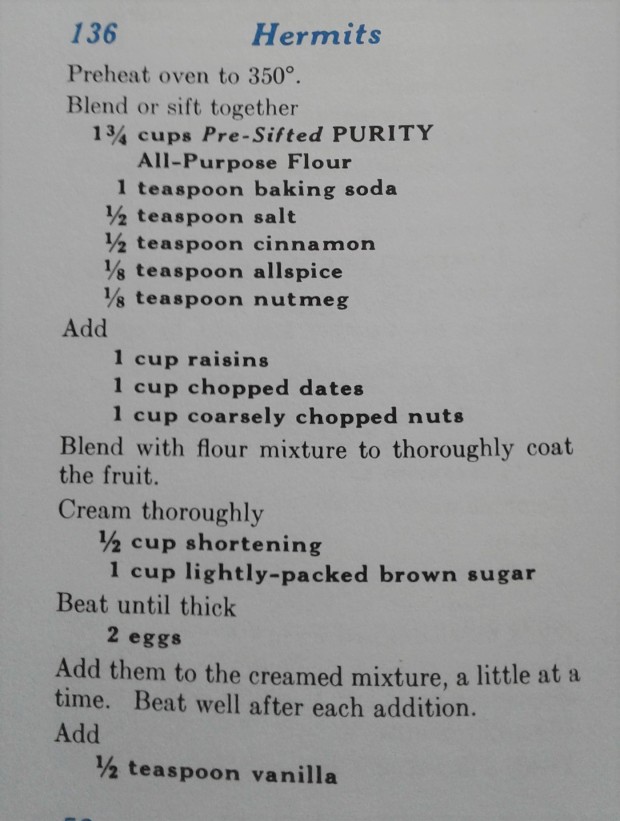 and the ingredients…nothing fancy, although this version includes dates. 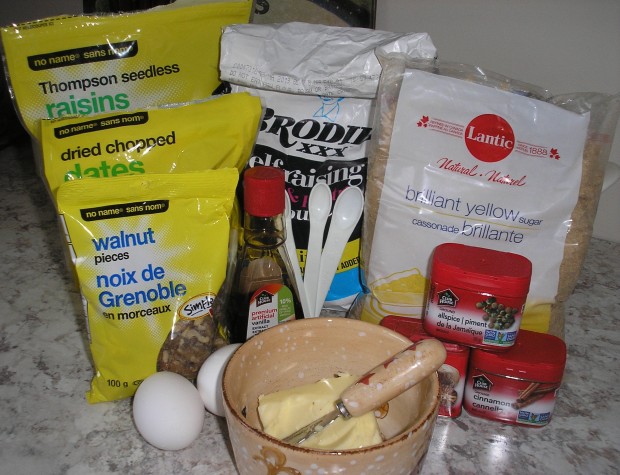 I used butter instead of shortening, and not as much, 1/3 cup.   My Allspice container said it was a mixture of cloves, cinnamon and nutmeg, but allspice can also be a spice (from a plant berry) on its own.   If Allspice is not in your spice rack, Google has plenty of references for substitutes, including one on one cloves, but I find cloves strong, so best not to overdo it. 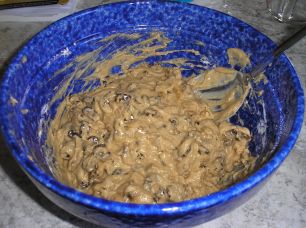 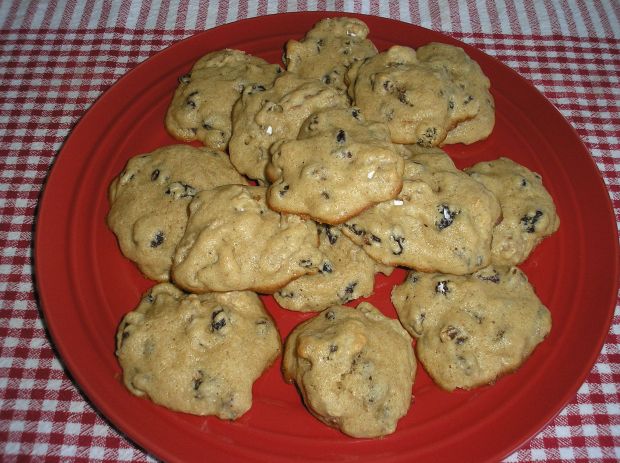 My mother was not much of a cookie baker, as my dad preferred pies and cakes, so I don’t remember her making these very often when I was growing up but I always enjoyed them when she did.  (She was more likely to make peanut butter or chocolate chip).    Back in the 1990’s, I worked at a rural hospital where the dietary department still made much of the hospital food from scratch.   Hermits were often on the cafeteria menu for morning coffee break, as were scones and homemade cinnamon buns.  I hadn’t had hermits in years, so imagine my delight on seeing them at the bakery in my  local grocery store last year.   They’re baked up fresh, although from a mix ordered in, according to one of the staff, and they have regular customers, mostly older folks like me who remember them from childhood. 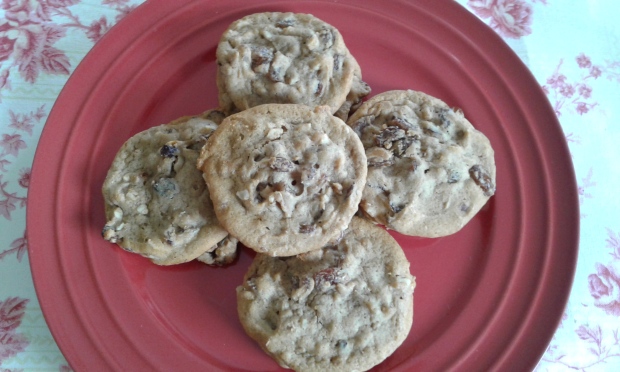 Of the three versions I’ve sampled, they’ve all have been a bit different, mainly in the spices department, but I think the bakery’s is the best, and probably comparable in price to homemade, ($5.49 for 12 large cookies), nuts and raisins being fairly expensive here unless you go to one of those bulk bin places.  The key is the right combination of spices.  Despite buying two dozen from the bakery, we ran out before the next grocery run, so I had to resort to making them from scratch.   Mine did not taste the same as the last time I made them but I suspect my nutmeg was too old.   That would have required a trip to the store, and I’m more like a hermit crab these days, scurrying around doing my essential errands quickly so I can return to the safety of my own home.

Stay in your home and stay safe!

We all might be getting a little crabby these days from too much sheltering in place, but a sweet treat always helps!   Remember to savor – according to the Petsmart website, hermit crabs take small bites and eat very slowly, usually at night.   Enjoy!

Postscript:   Do you have a favorite cookbook you use or may have inherited?