What makes a great beach book – any book with summer in the title.   Here’s my summer reading list (four read, two to go), and although only two of my selections qualify with respect to the title, they are all beach-worthy in one way or another. 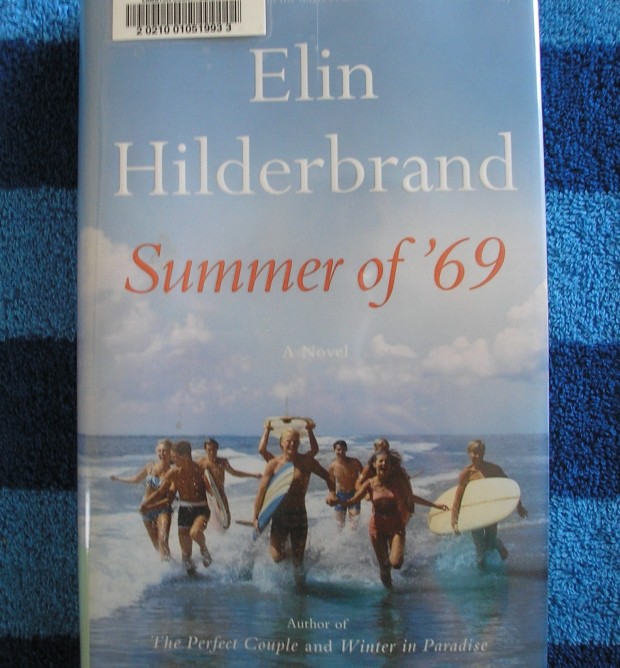 Publisher’s Blurb:  Follow New York Times bestselling author Elin Hilderbrand back in time and join a Nantucket family as they experience the drama, intrigue, and upheaval of a 1960s summer.   Welcome to the most tumultuous summer of the twentieth century. It’s 1969, and for the Levin family, the times they are a-changing. Every year the children have looked forward to spending the summer at their grandmother’s historic home in downtown Nantucket. But like so much else in America, nothing is the same: Blair, the oldest sister, is marooned in Boston, pregnant with twins and unable to travel. Middle sister Kirby, caught up in the thrilling vortex of civil rights protests and determined to be independent, takes a summer job on Martha’s Vineyard. Only-son Tiger is an infantry soldier, recently deployed to Vietnam. Thirteen-year-old Jessie suddenly feels like an only child, marooned in the house with her out-of-touch grandmother and her worried mother, each of them hiding a troubling secret. As the summer heats up, Ted Kennedy sinks a car in Chappaquiddick, man flies to the moon, and Jessie and her family experience their own dramatic upheavals along with the rest of the country.   In her first “historical novel,” rich with the details of an era that shaped both a country and an island thirty miles out to sea, Elin Hilderbrand once again proves her title as queen of the summer novel.

Why I liked it:    Her usual fare, but anyone who lived through the summer of 1969 (sorry millennials), will find this book especially appealing.   I was the same age as Jesse the youngest of the siblings, so I could really relate to the story line, the fashions and the music.    I especially liked how she incorporated songs of the era as chapter titles.

“For What It’s Worth” I think we had better songs back then.   I’d like to “Get Back” to that year on “A Magic Carpet Ride” as “Those Were the Days” my friend.   I was a “Young Girl” in ’69, a year when “Everybody’s Talking” about “Fly Me To The Moon”, that distant orb in the sky which was “A Whiter Shade of Pale”.    It was the “Time of the Season” for love and as we were “Born to be Wild” we were full of “Midnight Confessions”.   We didn’t need “Help” from “Mother’s Little Helper” or “White Rabbits” or have the “Summertime Blues” as it was a time of peace and hope.   For all it’s protests it was also a time of optimistic change, as politically “Everyday People” who had “Heard It Through The Grapevine” (as opposed to CNN or Fox), did not have “Suspicious Minds” and could look at issues “From Both Sides Now”.    Perhaps, “Someday We’ll Be Together” again, hopefully “More Today than Yesterday.”     Whew – I got them all in!   (How many do you remember?)

Instead of flying to the moon, let’s fly to Paris – One Summer in Paris – by Sarah Morgan

Publishers Blurb:  To celebrate their twenty-fifth wedding anniversary, Grace has planned the surprise of a lifetime for her husband—a romantic getaway to Paris. But she never expected he’d have a surprise of his own: he wants a divorce. Reeling from the shock but refusing to be broken, a devastated Grace makes the bold decision to go to Paris alone.  Audrey, a young woman from London, has left behind a heartache of her own when she arrives in Paris. A job in a bookshop is her ticket to freedom, but with no money and no knowledge of the French language, suddenly a summer spent wandering the cobbled streets alone seems much more likely…until she meets Grace, and everything changes.   Grace can’t believe how daring Audrey is. Audrey can’t believe how cautious newly single Grace is.  Living in neighboring apartments above the bookshop, this unlikely pair offer each other just what they’ve both been missing. They came to Paris to find themselves, but finding this unbreakable friendship might be the best thing that’s ever happened to them…

Why I liked it:   I’m not a big fan of romance fiction, but was attracted by the title and the book jacket.    I’ve never been to Paris, the story line sounded promising and it had a bookstore in it.   Basically this book was pure fluff, albeit readable fluff.   I don’t think I’ll be reading anything more by this author, as she is traditionally a romance writer and it was a bit too predictable for me.   Plus there was actually very little about Paris or the bookstore in it, which just goes to show how we can get sucked in by marketing.     (I swear if I ever write my murder mystery I’m going to call it Murder at the Paris Bookshop even though it’s set in another country – guaranteed sales – but perhaps that title has already been taken?)

Did I mention I’m a sucker for any title with a bookstore in it, so No. 3 is The Bookstore on the Corner – by Jenny Colgan.

Publishers Blurb:   Nina Redmond is a literary matchmaker. Pairing a reader with that perfect book is her passion… and also her job. Or at least it was. Until yesterday, she was a librarian in the hectic city. But now the job she loved is no more.  Determined to make a new life for herself, Nina moves to a sleepy village many miles away. There she buys a van and transforms it into a bookmobile—a mobile bookshop that she drives from neighborhood to neighborhood, changing one life after another with the power of storytelling.   From helping her grumpy landlord deliver a lamb, to sharing picnics with a charming train conductor who serenades her with poetry, Nina discovers there’s plenty of adventure, magic, and soul in a place that’s beginning to feel like home… a place where she just might be able to write her own happy ending.

Why I liked it:    I haven’t read it yet, but with a bookstore, how could it fail?  (I’m reserving judgement, see above).   (Edited to add:  Two chapters in and I’m loving this book – the main character, the humorous style of writing, the Scottish locale, it’s simply charming, and there are actual books in it!)  (Note after finishing:  I’m quite disappointed – two thirds of the way through this book turned into a Hallmark movie.   It was all down hill after the scene with Mr. Darcy wearing a kilt and carrying an injured lamb…..well those were actually two separate scenes but you get the drift….really I m much too old for this romance stuff.  Where is Jane Austen when you need her!)

It’s summer concert season.   Let’s go back in time again, this time to the 70’s.  Based loosely on the rock group Fleetwood Mac, Daisy Jones and the Six – by Taylor Jenkins Reid was a selection of Reese Witherspoon’s book club.    I can already see the movie being made….now who will play the lead singers?

Publisher’s Blurb:  Everyone knows Daisy Jones & The Six, but nobody knows the reason behind their split at the absolute height of their popularity . . . until now.
Daisy is a girl coming of age in L.A. in the late sixties, sneaking into clubs on the Sunset Strip, sleeping with rock stars, and dreaming of singing at the Whisky a Go Go. The sex and drugs are thrilling, but it’s the rock and roll she loves most. By the time she’s twenty, her voice is getting noticed, and she has the kind of heedless beauty that makes people do crazy things.  Also getting noticed is The Six, a band led by the brooding Billy Dunne. On the eve of their first tour, his girlfriend Camila finds out she’s pregnant, and with the pressure of impending fatherhood and fame, Billy goes a little wild on the road.   Daisy and Billy cross paths when a producer realizes that the key to supercharged success is to put the two together. What happens next will become the stuff of legend.   The making of that legend is chronicled in this riveting and unforgettable novel, written as an oral history of one of the biggest bands of the seventies. Taylor Jenkins Reid is a talented writer who takes her work to a new level with Daisy Jones & The Six, brilliantly capturing a place and time in an utterly distinctive voice.

Why I liked it:  Despite it’s great reviews I wasn’t sure I was going to like this book.   It wasn’t a subject matter that interested me, as I attended a Catholic high school and my recollection of the 70’s was not exactly sex, drugs and rock and roll.    But I ended up loving it – and it’s definitely one of the most memorable books I’ve read this year.  Basically it’s a love story, but not your typical one.   I even liked the unique interview format a la Rolling Stone, which surprisingly readable.  The book is pure fiction but the characters seemed so real that several younger reviewers on Goodreads believed it was a memoir about a real band.   Someone really needs to set those lyrics at the end to music.

Enough of the retro, here’s a psychological thriller to keep you in suspense during those nights when it’s too hot to sleep – The Silent Patient by Alex Michaelides

Publishers Blurb:  Alicia Berenson’s life is seemingly perfect. A famous painter married to an in-demand fashion photographer, she lives in a grand house with big windows overlooking a park in one of London’s most desirable areas. One evening her husband Gabriel returns home late from a fashion shoot, and Alicia shoots him five times in the face, and then never speaks another word.   Alicia’s refusal to talk, or give any kind of explanation, turns a domestic tragedy into something far grander, a mystery that captures the public imagination and casts Alicia into notoriety. The price of her art skyrockets, and she, the silent patient, is hidden away from the tabloids and spotlight at the Grove, a secure forensic unit in North London.   Theo Faber is a criminal psychotherapist who has waited a long time for the opportunity to work with Alicia. His determination to get her to talk and unravel the mystery of why she shot her husband takes him down a twisting path into his own motivations—a search for the truth that threatens to consume him….

Why I liked it:   I don’t usually like first person narratives, especially by male protagonists,  but this was very well done and overall an excellent book for a first time novelist.    Never even saw the ending coming – I am in awe of the brilliance.

And lastly, because even the best of summers have to come to an end and real life resumes, a family drama – After the End – by Clare MacIntosh.

Publisher’s Blurb:  Max and Pip are the strongest couple you know. They’re best friends, lovers—unshakable. But then their son gets sick and the doctors put the question of his survival into their hands. For the first time, Max and Pip can’t agree. They each want a different future for their son.   What if they could have both?  A gripping and propulsive exploration of love, marriage, parenthood, and the road not taken, After the End brings one unforgettable family from unimaginable loss to a surprising, satisfying, and redemptive ending and the life they are fated to find.

Why I liked it:   I haven’t read this one yet either.   I’m saving it for August, but it sounds like a departure from her usual crime suspense novels (I Let You Go, I See You).    We shall see….

There – a little something for everyone under the sun – Happy Reading!

PS.   What are you reading this summer?