Wassailing is an old British custom associated with New Years which originated in the fifteenth century.   It is usually celebrated on Twelfth Night – Jan 5 or 6.   The tradition of wassailing falls into two different types, the house-visiting type which consists of neighbors roaming from door to door singing and drinking from a wassail bowl, which later became caroling,

and the orchard-visiting wassail, which refers to the ancient ceremony of visiting apple orchards in the cider producing regions of England, and singing and reciting blessings to the trees in order to promote a good harvest for the following year.   The wassail itself was a cider or ale based hot drink seasoned with spices and honey and served in a huge bowl made of silver or pewter.   The greeting wassail comes from the English term “waes hael” meaning “be well” which is what we traditionally wish for everyone at New Year’s – health and happiness for the coming year.

The song Here We Come A Wassailing dates from 1850, and later morphed into Here We Come A Caroling.  Here are the very catchy lyrics, best sung with a pewter mug in hand.

We are not daily beggars
That beg from door to door;
But we are your neighbors’ children,
Whom you have seen before.

Good master and good mistress,
While you’re sit beside the fire,
Pray think of us poor children
Who are wandering in the mire.

Call up the butler of this house,
Put on his golden ring.
Let him bring us up a glass of beer,
And better we shall sing.

Yes, who doesn’t sing better with a little alcohol in them.  Think of it as a kind of medieval karaoke, not drunk but with just enough of a glow to warm the tingling fingers and toes on a cold winter’s night.    The pewter mugs are family artifacts, but lacking an ancient wassail bowl I improvised with a plug-in soup tureen, (thrift shop find $7), although a slow cooker crock-pot would work well too.

There are numerous recipes for wassail on the internet, including some non-alcoholic as well for children or non-drinkers.

I tried the Cranberry and Spice Wassail recipe on the packet of Gourmet Village mulling spices and it was good but I think I would substitute apple cider for some of the water to give it more flavor, and I also added more honey to sweeten it.   Both the Mulled Cider and Mulled Wine recipes sound comforting too, and because it’s all about 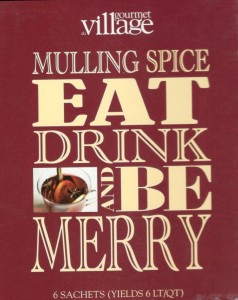 don’t forget to serve some food so those merry revelers don’t get too drunk and curse your apple orchards instead, because then you may not have a good crop and as the British novelist Jane Austen said, “Apple pies are a considerable part of our domestic happiness.”

Ringing in the New Year, with best wishes for health and happiness in 2018!

9 thoughts on “Here We Come A Wassailing”