Our regional art gallery is having a four month exhibit called Witness – Canadian Art of the First World War.  This travelling exhibition comprised mostly of works from the War Museum’s Beaverbrook Collection, was most recently shown in France, near Vimy Ridge and is quite a prestigious honour for the local gallery.

It does seem somewhat bizarre now one hundred years later to think of a country commissioning artists (including some of the Group of Seven) to record a war, but photography was in it’s infancy, and presumably not allowed near the front lines.  The painting below depicts the arrival of the (camouflaged) Olympic, sister ship of the Titanic, in Nova Scotia with 5300 returning soldiers in Dec 1918.   My Uncle Charlie was not among them as he had contacted the Spanish flu and did not return to Canada until six months later.

Uncle Charlie was a Canadian WW1 veteran.   A great uncle by marriage, he was married to my grandmother’s sister both of whom had died before I was born so I never knew them, although I remember Uncle Charlie as an old man with emphysema, probably from a combination of being a baker by occupation and being exposed to gas in the war.   My dad used to visit him every New Years, and sometimes I would go along but I have no distinct memories of him as a child.   Now as the history buff in the family, I have inherited his metals and war memorabilia, and so I decided to record something for the Stop and Share session organized by the local heritage museum to preserve family memories of the war veterans.  The heritage museum set up an artifact display room next to the gallery and it amazed me how small the uniforms were.   They looked like they would fit a skinny teenager, which they often were, but people were generally smaller back then.  According to his discharge paper Uncle Charlie was only 5 ft 4 inches.

Charles Elliot Rae of Courtright, St. Clair Township enlisted on Feb 26 1918 at the age of 29 at London Ont.  (see Discharge paper below)

He was single, and lists a friend as next of kin, so I am not sure what happened to his immediate family.   As deferred pay could only be assigned to a relative, he crossed out friend and wrote aunt. 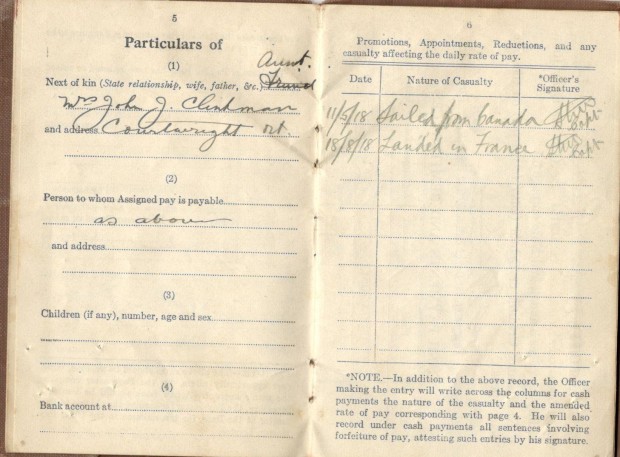 Privates were paid a dollar a day with a field allowance of ten cents, for a total of $33 a month, and $15 of that could be deferred, with the amounts of both increasing according to rank.

As conscription came into force in Canada in Jan of 1918 I would assume he was conscripted, as he was older than most of the earlier recruits.   None of my dad’s other uncles were veterans as they were farmers and well into their 30 and 40’s during the war years.

We know he was part of the Canadian Machine Gun Corps in France, as part of the 2nd CDN. Engineer Battn, according to his pay book, plus his discharge paper says he served in France with the Canadian Engineers.  Engineers had a fairly dangerous job as they were the ones who went ahead to prepare the way.    I have an old battered cardboard box (which was probably mailed to him after the war, judging by the outside), in which there is a Canadian Engineer pin, and two medals, one with a multi-striped ribbon and The Great War for Civilization 1914-1919 on one side and an angel on the other, and the other with an orange and blue striped ribbon with a picture of King George on the back and a horse on the front.

He enlisted in Feb 1918 and sailed from Canada on May 11 1918 to England, then he landed in France on Aug 18 1918, probably as part of the Hundred Days Offensive in the last part of the war.  From his two pay books I can trace his journey as he is paid in Canadian money, then pounds, then francs, then marks, then francs, pounds and Canadian in reverse.

The pay book has him in France on Nov2 1918, just before Nov 11 Armistice day.   The next entry Nov 15 1918 has him receiving Xmas Pay of 70 something, and then on Dec 6 and Dec20 he is paid 20 and 30 marks so we know he spent Christmas in Germany. I have two folding cards of German postcards which he must have bought home as a souvenir. 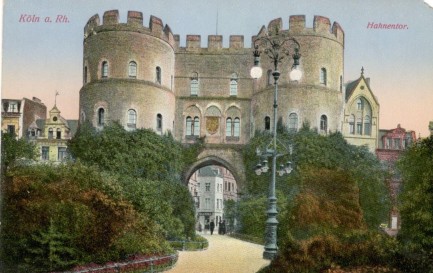 In January he is back in France, and on April 2 2019 he is back in England (at Norpington), where he stays until he is sent home to Canada on May31 2019.  Like many veterans he never talked about his war experiences, other than he had been gassed, and that he was six months coming home as he almost died from the Spanish flu.   His discharge paper says he was discharged Jun 23 1919.   He must have convalesced in an English hospital as there is a picture postcard of soldiers in a hospital ward, with a handwritten note on the back saying “there are 46 wards like this one with 40 to 50 beds in each.”   (note the two nurses at the back)

I am not sure if he is actually in the picture (front left) or if someone from the heritage committee assembling the WW1 book for the township, just assumed that was him in the front row, but it could be him, based on later pictures.

back of unmailed postcard

There is also a pictorial folding letter postcard of the town of Camberley postmarked from a Yepl. McNamee, Essex Scottish, Canadian Army England to someone in Windsor, Canada with a postage stamp on it, which is a bit of a puzzle.   It looks like it has been opened, but did the soldier die before it could be mailed?  So much of genealogy is like figuring out a puzzle, connecting the dots, like following his trail through the pay book.

One of the most interesting things I have of his is a ticket holder from the Cunard ship he sailed home on.  I am not sure if the HMS Cunard ships just returned the soldiers to England from France or back to Canada also, but he had quite a few postcards of these ships.   The actual ticket is missing, but the cover of the holder says, “To Comrades from Overseas – the Cunard Steam Ship Co. Ltd., in wishing you a safe and pleasant voyage back to your Homeland, desire to express their unbounded admiration of your great fighting qualities and the sacrifices you have made in all theatres of The War.   Peace Year, 1919.”

There are also twelve postcards of various HMS Cunard ships, (note the airplane in the one below), mostly in England but one of Quebec. 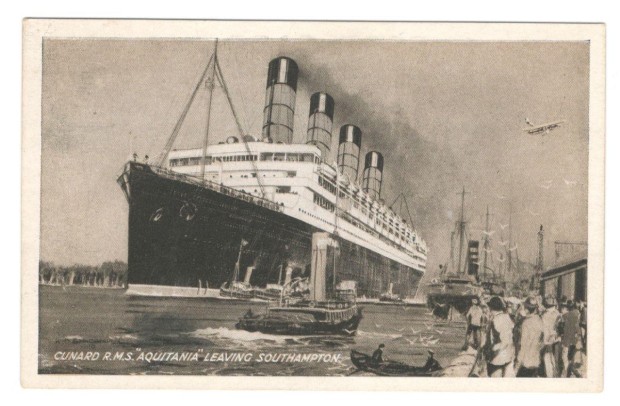 Postcards were popular back then, so there were also a number of of postcards of other lake liners from after the war.  The one below is addressed to his fiancée Genevieve (my grandmother’s sister) from a G.A.W. postmarked Detroit Michigan and mentions her and Charlie-boy and he would have sent a picture of the two of them from their trip but the camera man said she broke the glass and they were no good!  Maybe it was from their honeymoon?

When he was discharged back to Canada from England he received the grand total of $81.14, which included a civilian clothing allowance of $35, and boat expense money of $4.87 and train expense money of $5….I assume this was only for the last few months in England. 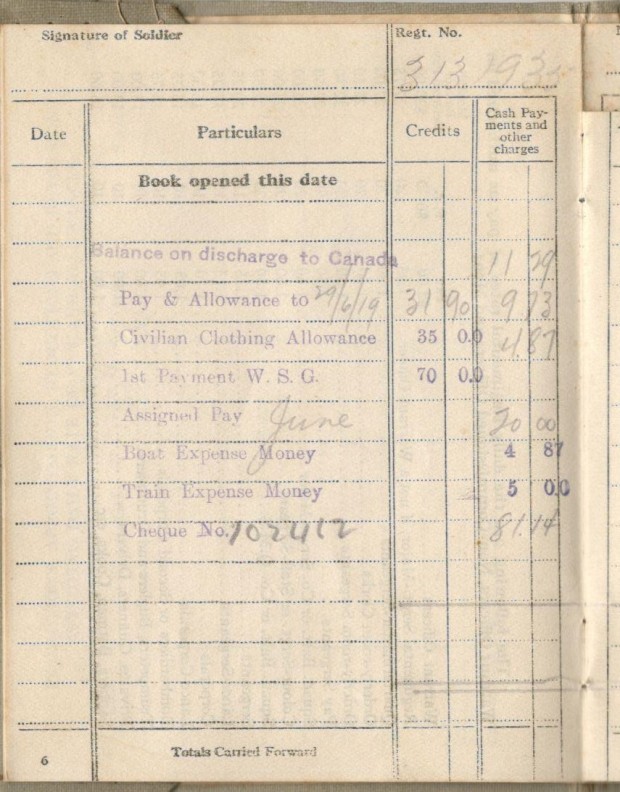 But I have no idea what he received for the time in total as his other pay book which has more frequent entries, lists 973 and 686 (on June 6 1919) as final entries, but these amounts don’t add up either as he was only about 18months in the war (at $33/month) and it doesn’t say what denomination it is in.    I wonder how this compares to today’s rates……I also wonder if they had a major war like that today would anyone sign up?    People were more patriotic back then, but they were also unaware of what they were getting into.  Even the war artists presented somewhat sanitized versions of the bloodshed.   We are well aware today, in this age of bloody reporting, non-stop news and nuclear arms, and yet still war talk persists…..perhaps because it seems so far removed from life in the muddy rat-infested trenches…..and more like a video game you can exit any time you grow tired of it, except you can’t.   It’s a sad thing when the world can’t learn from it’s mistakes.   Uncle Charlie was one of the lucky ones, he came back.   Lest we forget.

Song of The Day:   If You Were The Only Girl In The World – Alfie Boe – click here for music link

The song was originally recorded in 1916.   It sounded much better when Mary Crawley sang it on Downton Abbey when Mathew returned home from the war.

Courting postcard from a hundred years ago:

Movie of the Day:   Warhorse – 2011 – Steven Spielberg – a Hollywood version of WW1 but still a good movie – imagine using horses in a war today?