It must be a bad year for garden tours as I have not seen anything advertised and July is almost over.     We had a late spring, then it got very hot very suddenly.   We had too many days of over 40 C and very little rain and were fast approaching the crispy grass dried out part of summer where everyone but the most die-hard enthusiasts has given up, when the skies opened to a whole week of torrential downpours.   Now everything is green again but soggy.   Mother Nature is being temperamental this year, but at least we can go to the beach guilt free.

It’s nice to go on garden tours to get inspiration and new ideas, plus it gives you a good excuse to wear a stylish hat, perhaps something with a broad brim and a navy grosgrain ribbon?   (I’m always in search of the perfect hat and sometimes the hats are more fun to look at than the flowers).   Two years ago, while on a garden tour I snapped a picture of this shady oasis of calm.

While purple and green are not colors that I would ever have thought of for a garden bench, the combination was eye-catching, and I believe the homeowner was ahead of the trend, or maybe I was two years behind as usual.   It wasn’t something I thought would work in my predominately pink garden, but I did steal their idea for the birdcage with the ivy flowing from it.

(Check Michael’s end of summer sale for birdcage bargains).   My ivy did not fare as well being exposed to too much sun, so this year I tried wave petunias which also did not do well either in the small space.    Maybe next year a fake ivy plant from the thrift store?   Would anyone notice?

I noticed the purple and green theme back in the spring when the nurseries started carrying colored pots.    Purple looks particularly striking with pots of herbs,

and since then I have seen deep purple Adirondack chairs as well. 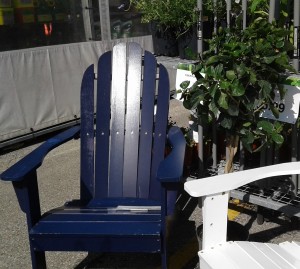 So onto my own little garden space.    I will spare you the bedraggled bits and concentrate on the things which looked lovely in June, the most popular time for garden tours. 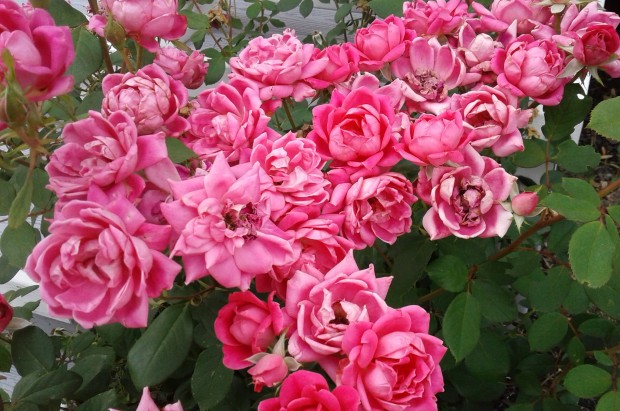 It was not a great year for the Knock-out roses as I pruned them the first of April and then we had two more weeks of winter, so lots of buds but not as much foliage and many dead branches.   For those unfamiliar, Knock-Out roses bloom all summer and are essentially maintenance free.

I have lots of pink roses in my garden and purple can be a great accent color for pink.   It can be a dark shade, as in these Jackmanii clematis vines next to the John Cabot climbing roses, 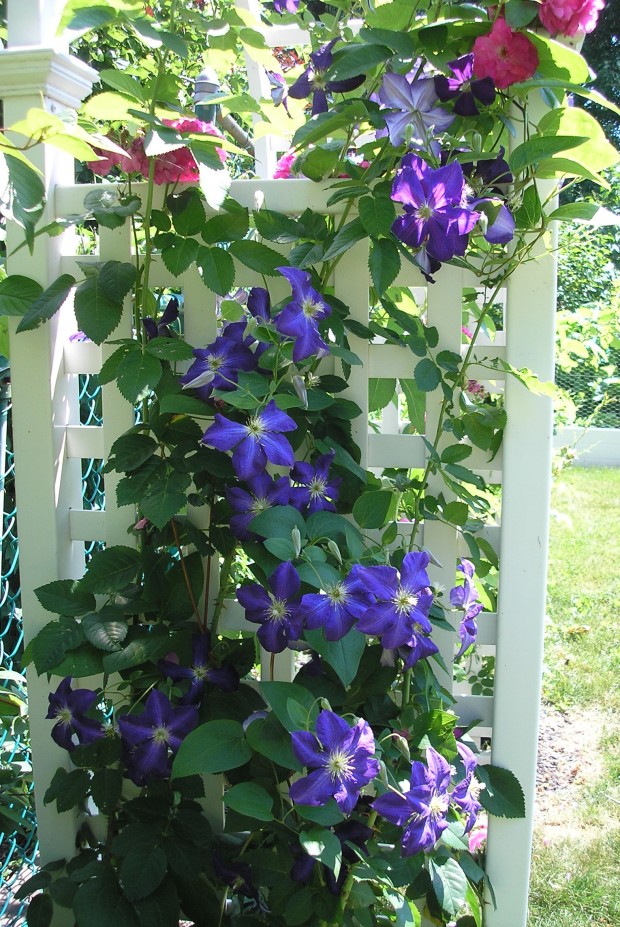 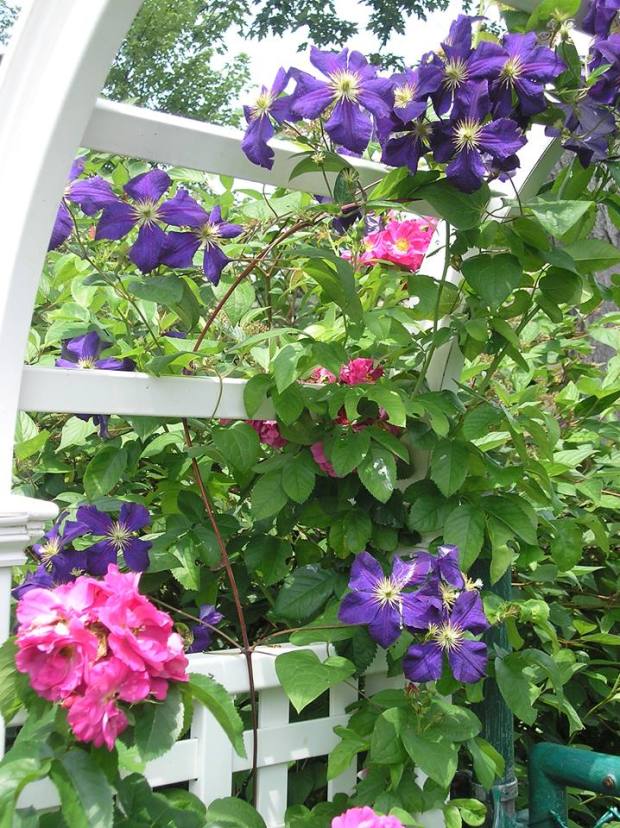 or the purple Salvia, next to the pink Knock-Outs.

It can be a mixture of both dark and lighter shades as in this Purple Iris belonging to a neighbor.   I bought two clumps of this at the horticultural plant sale in May anticipating next spring.

Or it can be a pale lavender shade as in this Russian Sage,

and Rose of Sharon.

The Russian sage has been in for five years now and is thriving at over three feet tall.   It is drought resistant.  The Rose of Sharon, eight years old and covered with blooms every year, was another wise choice.

Then there are the mauve hydrangeas who can’t make up their mind if they are pink or blue, (wrong with the aluminum sulfate again). 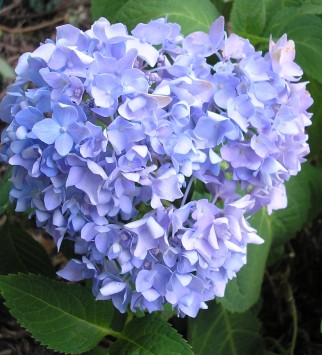 And of course we can’t forget the lilacs, the delight of every May.

The majority of my lavender plants did not survive the winter so I had to replant, leaving me with a few spiky survivors.   This two year old French lavender plant in the back corner although not very full compared to my older English ones, blends in well with the pink wildflowers.

Then there were the mistakes.   Not every shade of purple is attractive.  These foxglove seedlings from the farmer’s market came up a fuchsia color I did not care for at all as I was expecting a rosy pink.

lovely in it’s own way but clashing with the bubblegum pink of the rose bush beside it.   It’s unfortunate these two fuchsia friends could not be together but one is in the side yard and one at the back.    Some days I swear I will never buy anything again unless it is in flower and able to speak the truth.

This year I planted multi-colored morning glories in front of this old recycled trellis…..twice.   They came up and then seemed to disappear.

I suspect the rabbits who lounge in my backyard in the evenings have been munching them for desert.   (They were upset because they couldn’t get at all those glorious carrots in the potager.  They have now moved on to sampling the petunias).

I was pleasantly surprised to see how much purple I actually have in my garden, but as every gardener knows there is always room for more and that neglected corner was telling me to buy a purple clematis to go with the lime green cart, and to think it all started with a garden tour…..

What great ideas have you discovered at a garden tour?