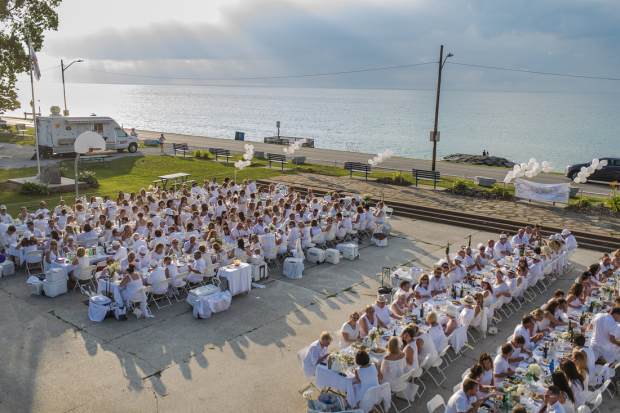 The Simply White Dinner is an annual event which originated in Paris twenty-five years ago and has now spread to cities all over the world.   The local version of this outdoor picnic has sold out again.  Every year this event gets bigger and more extravagant and every year people pay for the privilege of sitting with 300 other guests all wearing white on a summer evening and listen to jazz music while they dine on their own picnic fare.    Tickets are $60 per pair, (only pairs as the organizers want an even number of tables), and every year it sells out.   And yes, you bring your own food.   The $60 charge is only for the ambiance.   Bottles of wine (presumably white) are available for purchase, but you must bring your own bottle opener, white picnic basket/bag/cooler, white china, glass ware, real cutlery, (no plastic please), white linen napkins (to wave in the air for the group picture) and centerpiece (perhaps white hydrangeas).   You must wear white, and only white, except for footwear.    Elegance is encouraged, hats, fascinators, white boas, white gloves etc.   They supply the tables and chairs, the white tablecloths and the music.   The rest is up to you.   The location is top secret until the day before the event, presumably to avoid gawkers (although it might be hard to hide 300 chairs) but is usually somewhere along the waterfront.   This year they had a perfect summer evening with a lovely breeze coming off the water, last year it was sultry and sweltering hot.   It’s hard to dress chic when the humidity soars to over 40 C.

Now if you are a romantic at heart this sounds very enticing.   The event organizers promise a magical evening of outdoor dining, music and dancing under the stars.   It does sound wonderful and very Gatsbyish….who wouldn’t want to dress up like Daisy Buchanan?

Except even the local newspaper christened it The Chic Potluck because……where are all the men?    The closeup in the paper showed a long table of stylishly dressed women with hats and white flowers or wreaths in their hair, with a few dapper men here and there, coerced into white suits or white golf shirts and white pants by their wives, but they were older, grayer men who may have grown up with John Travolta’s white disco suit in Saturday Night Fever, or perhaps Don Johnson’s pale linen jackets in Miami Vice, or maybe even Humphrey Bogart’s white tuxedo in Casablanca.    White is not a color favored by a lot of men, except for the classic white dress shirt which accompanies suits and ties, and I believe even that has fallen out of favor except for funerals and weddings.   Women enjoy wearing white, and as Jane Austen famously quoted in Mansfeld Park, “A woman can never be too fine while she is all in white” but I think Jane was probably thinking of younger women.    I abandoned white years ago as it can be unflattering to the skin tone of women over fifty.   In fact I don’t believe I own a single white item in my wardrobe.  I also can’t sit in the direct sun for three hours – would my beige parasol be confiscated at the door?

Informal poll:  Female readers would your boyfriend/husband/male significant other be willing to don white (and we’re not talking white t-shirts here), to attend such an event?  (Male readers I would like your opinion too).  Men might be enticed by the promise of a good meal, but remember you are bringing your own food and it probably won’t be them making or packing the picnic lunch.   All of these are perfectly valid reasons to just stay home.   Still I am feeling a bit wistful about missing the promise of an enchanting evening.  (musical interlude from South Pacific)

The first year they allowed registrants to pre-order a boxed meal of a salad with protein/chicken for $22 (has anyone noticed that the $15 salad has now become $20) but that was soon abandoned, probably for liability reasons.   There are suggestions for picnic fare on the website…..appetizers, sandwiches, deserts.   The food does not have to be white, but what if it was?  If we’re going to have a theme here let’s go all out.   How about aged white cheddar with crackers, and white radishes and cauliflower veggies with ranch dip as appetizers.   Lobster or lobster rolls, or tuna on French bread.  Or that perennial picnic favorite, cold chicken and potato salad with white chocolate mousse or  crème brulee for desert?    Sounds like a plan, and you don’t have to pay sixty dollars to do it – you can put the money you save towards the lobsters.   Just organize a party for your own backyard some soft summer evening.   Invite some friends over and serve Prosecco or Pina Coladas.   Play old vintage Frank Sinatra/Dean Martin tunes instead of that horrible screechy jazz.   You might even cheat and stay out until midnight if your neighbors don’t object, instead of packing it in at ten as the official white party does.   (I’m not sure how much dancing under the stars would get done when it doesn’t even get dark here until well after nine, but you might get a good forty-five minutes of twilight twirling in).

Being possessed of an analytical mind, I decided to do the math.    300 tickets X $30 is $9000.   Nine thousand dollars to cover the rental of the table and chairs, the tablecloths and the jazz trio and DJ, might still leave some money left over, but as I don’t know anything about event planning, maybe they just break even?   They say they do it for the fun, it’s not a charity event.   It does seem like a lot of money though for some ambiance.   Last year I had tickets for a Local Harvest dinner, where for $30 a person you got an actual meal outdoors at the local farmers market square.   Although it was the end of September (timed for the harvest moon) and a coolish night they had heaters and a band played later.  (This reasonable price however might have been subsidized by the culinary arts students from the local college learning their trade).   The meal itself consisted of artisan bread, potato soup, locally sourced salad greens, a beef and a turkey entree, rustic vegetables and assorted homemade pies for desert.   And recently I attended a church dinner where the menu was a starter chopped salad, roast beef, chicken cordon bleu, mashed potatoes, carrots, coleslaw and homemade strawberry trifle for desert.  (This meal however might have been subsidized by the church coffers as a thank you to the volunteers).    And last June I attended a WW2 swing dance in an airport hangar, with a truly memorable roast beef and chicken buffet with the most scrumptious cheesecake for desert with a choice of lemon, cherry or blueberry toppings, and afterwards an evening of big band music with a 23-person orchestra.   Vintage dress was encouraged, some women did, most men did not, although I did see a few who might have been wearing their grandpa’s old uniform.   Tickets for that charity event were $75 per person, but as they have increased it to $100 per person this year they must not have made any money.   So, it is possible to have both food and ambiance for a price, (and it is possible to get members of the male species out for an evening of dining and dancing if there is a vintage B17 bomber on display to tour).

Perhaps it is a case of country mouse versus city mouse, but if given a choice I think I prefer food over ambiance.   Still if Jay Gatsby offered to buy the tickets next year and pack me a picnic basket I might be persuaded to attend.

Song of the Night:   Dancing in the Moonlight

Quote of the Day:    “There was music from my neighbor’s house through the summer nights.  In his blue gardens men and girls came and went like moths among the whisperings and the champagne and the stars.  (The Great Gatsby – F. Scott Fitzgerald)

21 thoughts on “The Simply White Dinner”

“Be so busy loving your life that you have no time for hate, regret or fear.”  (Unknown) 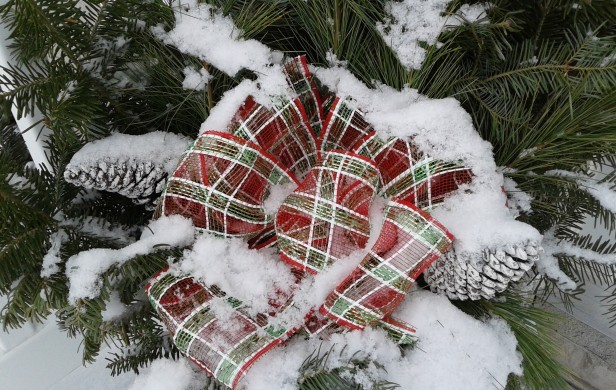